Home › Ready Room
Shan's PSA: Stay well and be kind to each other. Thread: https://forum.disruptorbeam.com/stt/discussion/15748/psa-stay-safe-and-be-kind-and-follow-official-guidelines-from-official-health-organizations/p1?new=1

Travis S McClain ✭✭✭✭✭
July 2019 in Ready Room
Apologies if this is already common knowledge in these parts. I tend to get lost in the stats-based threads and stop following them very closely. Someone recently raised the question of whether the hazards based on the four skills outside the primary and secondary were all equally distributed or if they, too, followed some kind of unadvertised structure. There was also some question once upon a time whether certain primary/secondary combo Voyages were likelier to drop 4* crew (not counting Voyage exclusives). Both questions intrigued me, so I tracked my last 19 Voyages. For the purpose of control, I recalled immediately after clearing the 8:00 Dilemma in each.

What I can definitively say is that there are 305 hazards in an 8:00 Voyage. Beyond that, it does look like one skill turns up noticeably less frequently in most Voyages, but it's not consistent. For instance, CMD/ENG turned up thrice in this data set (columns G, K, and P). In the first and third, MED was in the 20's. In the second, though, MED was 41. That was the only time in all three of those runs that any skill outside the primary or secondary occurred cracked 40. 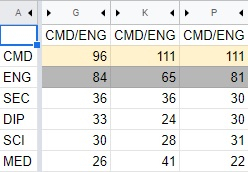 Anyway, I'm bored with charting this, so if anyone wishes to explore it further, here's a bit of data to start.
Forum Threads: My Guide to Crew Dismissal Decisions | Fleet Recruitment - ONE vacancy as of 3/4/20. | My Timelines Wish List
1