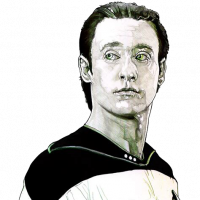 Lore's data of Data lore +FH+ ✭✭✭✭
January 2020 in Make It So!
So, I've been working on this list since DB last sent out a, "tell us how we can improve," survey. Now that a New Year is upon us (and the fact that an inventory "fix" is nigh) I thought I'd post this now, while one of my suggestions is still technically relevant.

These are my suggestions, to make STT better, in no particular order:

- Get rid of the top "1%" in arena. The top 1% keeps shrinking and it only take a lose or two to bump you out. This means the only way to stay there, for maximum rewards, is to check on your position minutes before the ranks are tallied. This is wildly unfair for those who can't do that; especially those from other countries. Another potential fix, for this problem, is to have the "loosing" ship simply move back one rank, rather than have the two ships switch places.

- Make honor much easier to get. For example, add a zero to all honor earned in campaign. This would mean that those who purchase the premium track will earn enough for a 5* citation and then some. Those that don't will almost make enough for a 5* citation. I only buy the campaign if the legendary character is someone I REALLY want. Otherwise I don't bother. Adding honor, to campaign, in this way would very likely change that. It would make the game far less grindy and, thus, make the campaign a much more enticing investment.

- THE INVENTORY MUST CHANGE. I can't stress this enough. It MUST change. There are a lot of ways on how, but the important part is that it changes. Having an item cap is fine. Getting items for a single character, that you have already fully equipped or don't have at all, is annoying, but fine. Getting items and having NO WAY to efficiently get ride of them is boarder line unacceptable. To get rid of these kinds of items, it literally takes me 30 minutes to 1 hour. Eventually, this will become my proverbial "straw" and cause me to quit the game forever. The fix doesn't even have to be that complicated. A simple ability to tap on any item, from any source, and delete it, right then and there (similar to dismissing crew from portals), would do WONDERS. Bottom line, and with all due respect, FIX IT. (Quite frankly, it's crazily overdue.)

- Give officers and admirals actual power, within their fleets: Allow admirals the ability to disband squads and/or reassign squad leaders. Give admirals the ability to see what officers do within the fleet. For example, if an officer dismisses a fleetember or changes "recommended" in the starbase, the admiral should be able to see who made what change and when. On that note, admirals should be able to grant their officers various levels of power (command). Maybe within a promotion system. An Ensign is granted access to officer chat, a Lieutenant can change what is recommended in the starbase, and Commanders have the power to remove players from the fleet. Something like that.

- Make selecting ships, for voyages (and possibly arena), easier. An auto select that selects a ship, that will give your voyage the most antimatter, would not go amiss.

- Take out the "intro" and "outro" of skirmish battles. We really don't need the see our ship fly in and see our opponent's ship blow up, over and over again. Taking this one thing out will make skirmish events feel MUCH less grindy.

- Bring back expeditions! Even if it's just for reruns/flashbacks. It would go a long way to breaking up event monotony.

- Easier equipment sorting. Possibly solved by just adding a search bar. It's too hard to find a specific item, to see how many of them you have.

- Let people replicate items directly from their inventory. I shouldn't need to hold on to a 1* Keiko, just to have the ability to replicate 2* science experiments.

- Allow people to see item drop rates and warp to episodes that drop said items, directly from the inventory menu. That way, when browsing your inventory, you can just warp items you seem to be low on.

- Import the character selecting from skirmishes to arena (and ship battle episodes). When you have hundreds of crew members, it can take quite a long time to find who you're looking for, when you try to change your lineup.

What do you think?
What suggestions do you have for DB?
Leave a comment! [=
Happy New Year!
Ten Forward Loungers - Give Your Best, Get Our Best!
Check out our website to find out more:
https://wiki.tenforwardloungers.com/
9