Bylo Band ✭✭✭✭✭
March 10 edited March 14 in The Bridge
(Link to version 1.1.0 of the VVT: https://docs.google.com/spreadsheets/d/1FxdGCLD_XWZkcHPc1PO-ihWRhBftaMaWfvVV6XNsPrg/edit#gid=1114378525)

As a special component of this third and almost certainly final part of the Voyage Project we will be introducing our brand new voyage tool to assist players in all aspects of improving their voyages. We call the tool the Viable Voyagers Tool (VVT) and I think you will love it, but I am very biased. It will be explained in greater detail later, but it is referenced a few times in my write up here so I wanted you to be aware of its existence at the start and to give you the initials so it is not confusing. I have setup a special Discord server for players to access and share screenshots and to ask for specific advice for both my new voyage system and the VVT. The join code for the server is on the Read Me page of the VVT but we ask that you keep all the general discussion, questions, etc here on the forums and leave the Discord server free for specific voyage diagnostics and screenshots. We love these forums and do not want to disrespect them needlessly, but we do understand that it is just easier to share screenshots and give specific advice on Discord.

In reviewing Part 2 (where we discussed the true nature of crew proficiency scores on voyages - https://forum.disruptorbeam.com/stt/discussion/17493/the-voyage-project-part-2-sort-of/p1) for this write up I feel a brief recap is in order. After publishing I worked with a handful of players and shared with them my new voyage system in preparation for this portion of the project and several times I was contacted by people in the early stages of adopting my new voyage system (more on that later!) and they were asking me why their voyages failed to reach 10 hours. Each time I would go over the screenshots and without fail, every time I found multiple High Proficiency crew like Gary Seven, Warship EMA, Mirror Shukar, etc and after diagnosing these issues changes were made and subsequent attempts were successful. Then during last weekend's event I got stuck with the Tholian ship trait and decided to test proficiency risk and use FOUR High Proficiency crew like Locutus and Amelia Earhart and I got everything lined up for another potential 10 hour voyage, and for the first time in months my voyage failed to hit 10 hours!

High Proficiency crew and their corresponding spikes of RNG are the enemy of both voyage predictability and reliability and the reverse is also true, the increased RNG from High Proficiency crew is the fuel that enables voyages chasing 12 hours, and to everyone who has been asking for a list of those crew or how to identify them, fear not, we have you covered (keep reading until the end!). The larger issue here however is that RNG is the enemy of reliability and performance, but crew proficiency is not the only source of RNG in voyages, there are a couple of others and it is important to understand what they are and how they can be countered by the player.

Ship traits and seat traits play a fairly significant part in every voyage as they enable a total of 450 additional anti-matter (AM). As far as is known there is no way for players to directly control this, each day the ship and seat traits seem to be random, the best a player can do to control this form of RNG is to max out as many 5* ships as possible and collect a wide array of crew with a diverse distribution of traits to try and match those seats.

Maximizing the starting AM in this way allows players to control to some degree the final source of voyage RNG, that being skill hazards. The widely accepted probability for voyage skill hazards is Gold = 35%, Silver = 25%, Tertiary = 10% each (incidentally we tested this ourselves and it checked out) which means that over the course of a 10 hour voyage you can expect approximately 130 hazards for your gold skill, 97 for your silver skill, and 38 for each of your four non-feature skills, so naturally it makes sense to load up on the gold and silver. That being said, while the odds eventually even out over a long voyage, at any given point in the voyage it is possible to hit many non-feature skills in a row, leading to a rapid loss of AM which threatens the life of the voyage since the non-feature scores are lower and begin failing much earlier, therefore having more AM is key to overcoming those short runs of bad RNG. In this sense the player that makes sure to start as many voyages as possible with the maximum bonus AM of 450 buys themselves the maximum time for their RNG "odds to get even" (RIP Neil Peart).

The key to unlocking your maximum voyage potential once you control for your desired proficiency risk and level up your 5* ships is crew traits! Whether you are gambling on a 12 hour voyage or following the Bylo Method (description to come!) where you strive to reliably hit 10 hours and recall 100% of the time, everyone benefits from maximizing their starting AM. To achieve this reliably players will want to make sure their roster of voyagers has a diverse collection of not only skill pairs but also traits, to make sure they can hit as many of seat bonuses as possible.

Wading into the sea of crew traits is daunting to say the least, there are so many to keep track of. Not all traits are created equal either, as only certain traits are ever featured on voyages and further still not every trait featured on voyages appear in every skill seat. Here then is a table that shows the 45 traits that appear on voyages, and which seats those traits give a seat bonus. 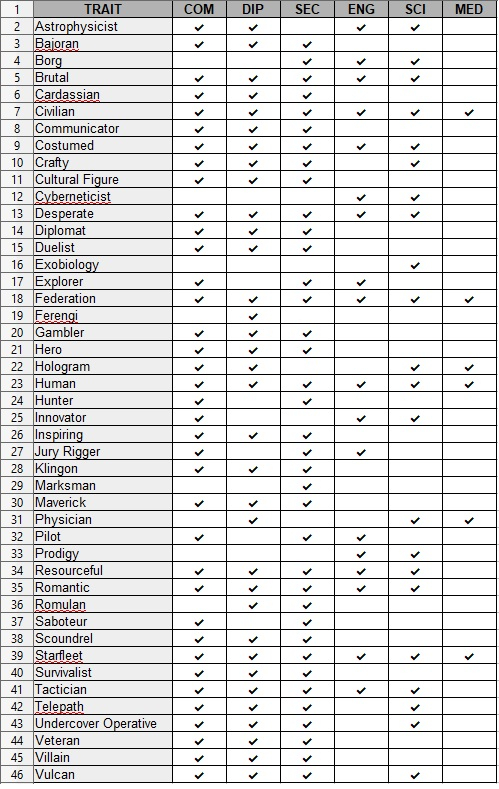