[TFA] GTMET (recruiting) ✭✭✭✭✭
April 2018 edited April 2018 in The Bridge
Summary: By looking at shuttles that have 1 crew slot, we can eliminate variables and more closely study the effects of the AND node. By doing this, 3 different testers, including @(FF) This Sisko1, @[TFA]Múspell and 1 other found nearly identical results where the 2nd skill of and nodes grossly under perform expected results. We can then suggest that you should treat AND nodes as 1st + 25% * 2nd, not Highest + 25% Lowest as was the prior communication.

Instead, when the game is calculating if you pass the shuttle, it uses the following formula:


Background: After investigating our findings from the last event and proposing the AND node failure mode, @Peachtree Rex suggested utilizing the federation shuttles to compare single skill shuttles against the single crew AND shuttles where there should be a huge difference in the data if AND nodes are being mis-calculated.

Experimental Design: To achieve this we looked at "Rescue Citizen Captives" DIP AND SEC and "Investigate corruption" DIP AND CMD. We needed to test for the hypothesis that the AND node is calculated 1st 2nd while controlling for potential other bugs in the mission or bugs in calculation. To do this:

3 testers ran single skill missions to see if those matched the chance of success.

Results: The missions with crew in the 2nd AND slot drastically under performed expectations, showing a result of 13% compared to the expected 71%.

The crew in the 1st skill of the AND missions were successful 16/16 runs. The small sample size could account for the abnormally high success rate, although we cannot rule out that there is actually some error that is boosting the success of the 1st skill AND missions, although that was out of the scope of this experiment. We can however rule out that the shuttles are drastically under performing the displayed success rate

The crew in the single mission shuttles came back right in line with expected success rates across the 3 testers. 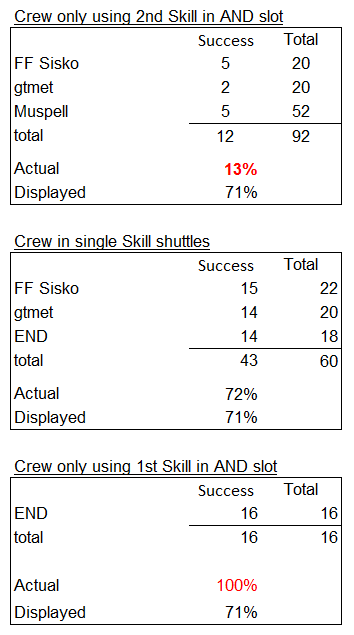 Conclusion: There is now a preponderance of data with other variables ruled out that the AND missions are clearly calculating as 1st + 2nd, not Highest + Lowest.

Additional notes: The expected success rates was an estimate from the testers, since the high success or failure rates would move the number and we all had slightly different crew, there was some variability, but in general all the shuttles had displayed ranges in the 68-75 range, sufficient for the scope of this trial.


ORIGINAL POST:
All, a team of 4 people led by @(FF) This Sisko1 have been comparing single slot AND shuttles with regular single slot shuttles. We don't have all the final data in, but with a faction event starting tomorrow we wanted to share the preliminary results.

While single skill missions are performing right around the displayed % of ~70%, the AND shuttles using only the 2nd skill have bombed at less than %10 success rate. We have a few more rounds of data to collect and some number crunching, but with an N for each group of between 50-100, there is just no doubt any more that the AND shuttles are not performing as intended.

It is our recommendation that you only use AND slots where you utilize the first skill in this next event. We will publish our final combined results soon.
Task Force April now has openings! Max Starbase! Task Force April is Looking for You!
41
«123456»