Vaelerys Targaryen ✭✭✭
July 2018 in Make It So!
(I'm posting this here in the forlorn hope that someone at DB might read it and take it to heart. Maybe future players will benefit from any changes implemented, but I won't be one of them.)

I stopped renewing my monthly card some time ago because of the frustration from packs. I've been playing almost 2 years, so nearly every pack has a character I've immortalised. The odds of getting that character every single time shouldn't be as high as they are, but - well, we all know the feeling. But so many packs have characters I WANT, which makes the near-guarantee of getting one I don't need feel like I'm being punished for my loyalty.

Buying packs used to be one of the most enjoyable aspects of the game. Watching those 10 slots fill up with new characters was great in the early days. Later on, the odd duplicate was no big deal, especially once honour points were introduced. Now, for a player like me, packs contain nothing but frustration: the one character I don't need, plus a whole raft of ship schems (useless given how many replicator rations I get from voyages). Even the airlock blues are more useful than schems. And I WANTED to spend money. All DB needed to do was add a refresh/respin option to the Behold dilemma and I'd have thrown more money at the game.

Well, I had enough dil from the "immortalise X crew" rewards (I've maxed now at 350) that I decided to take a chance in the last event. I really wanted Queen Guinevere Kira, but I was certain I'd get Tourist Reed. I can almost always FF the threshhold character in Galaxy events so he was the one I really didn't need. Sure enough, Pull #1 gave me Tourist Reed. And so did Pull #2. No Guinevere. Nothing useful at all.

I really wanted Breen Dukat. So I took another chance with the remaining dil, pretty much knowing I'd get Weyoun, who I already have immortalised. Yup - Pull #1 gave me Weyoun and a few airlock blues. I had just enough left for one more try, and yeah, at this point it was just sheer bloody-mindedness. It was also the single worst pull I've ever had, in many months of playing every single day. 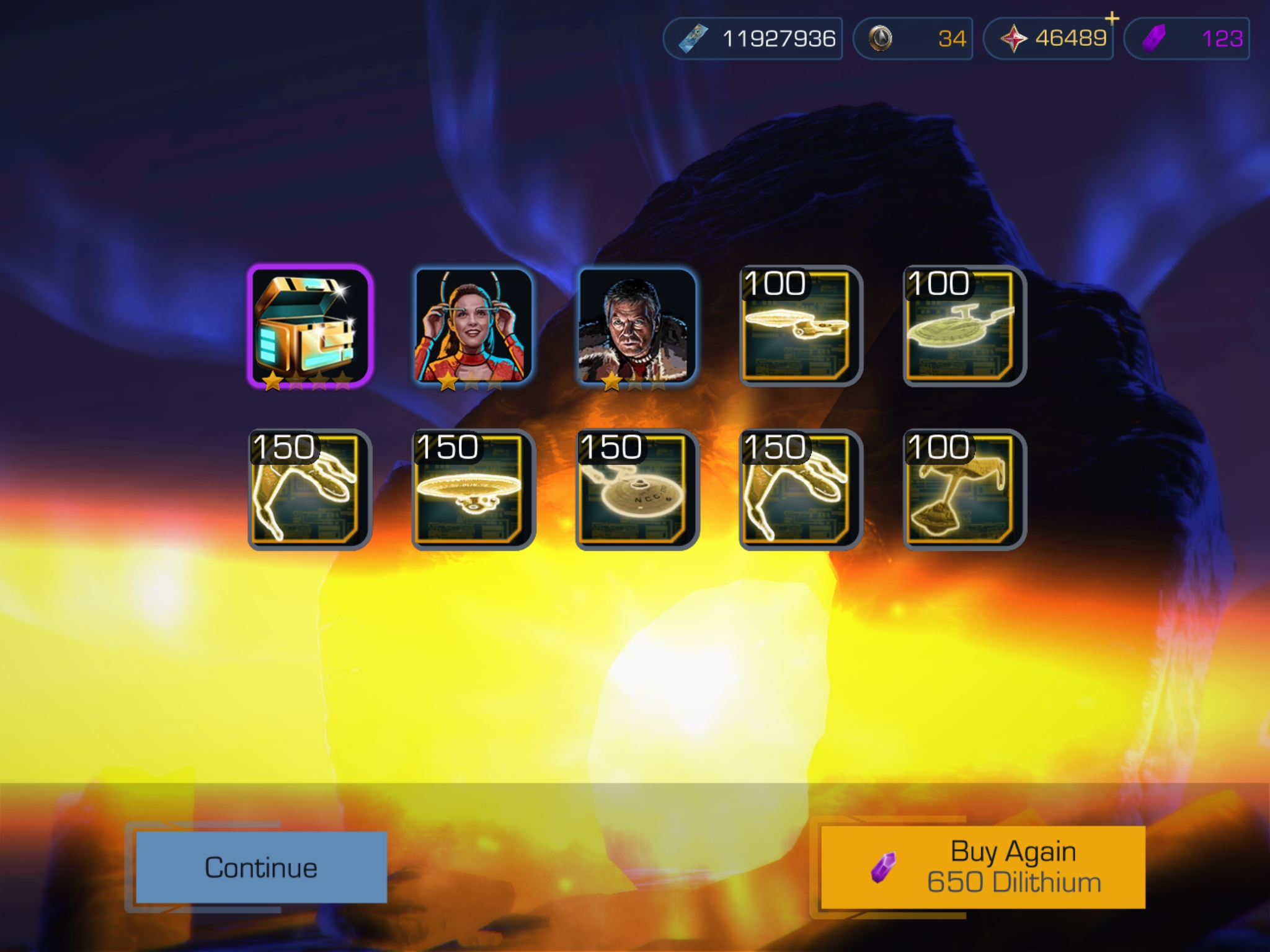 I'm sure you can guess what the first one is. Yes, another Weyoun. And that's it.

DB have lost yet another loyal (VERY loyal) player. I'm not angry; I'm really just sad. Sad because the fun has gone and sad because of how predictable these last 4 pulls were. If DB were deliberately trying to chase me away, they couldn't have done a better job.
"There are two types of beings in the universe - those who dance, and those who do not."
7