Phantum ✭✭✭
January 2019 edited January 2019 in Engineering Room
Has anyone else noticed that away missions shown for item drops is stuffed up when items are dropped by the same mission at two different difficulty levels. The game is not showing both difficulty levels but repeating the harder difficulty, making items cost more.

This could be costing you a lot of chrons. This is not always apparent unless you know the costs, because the game sorts missions according to cost so if you just click on the first mission listed without understanding costs you need to look down a bit. 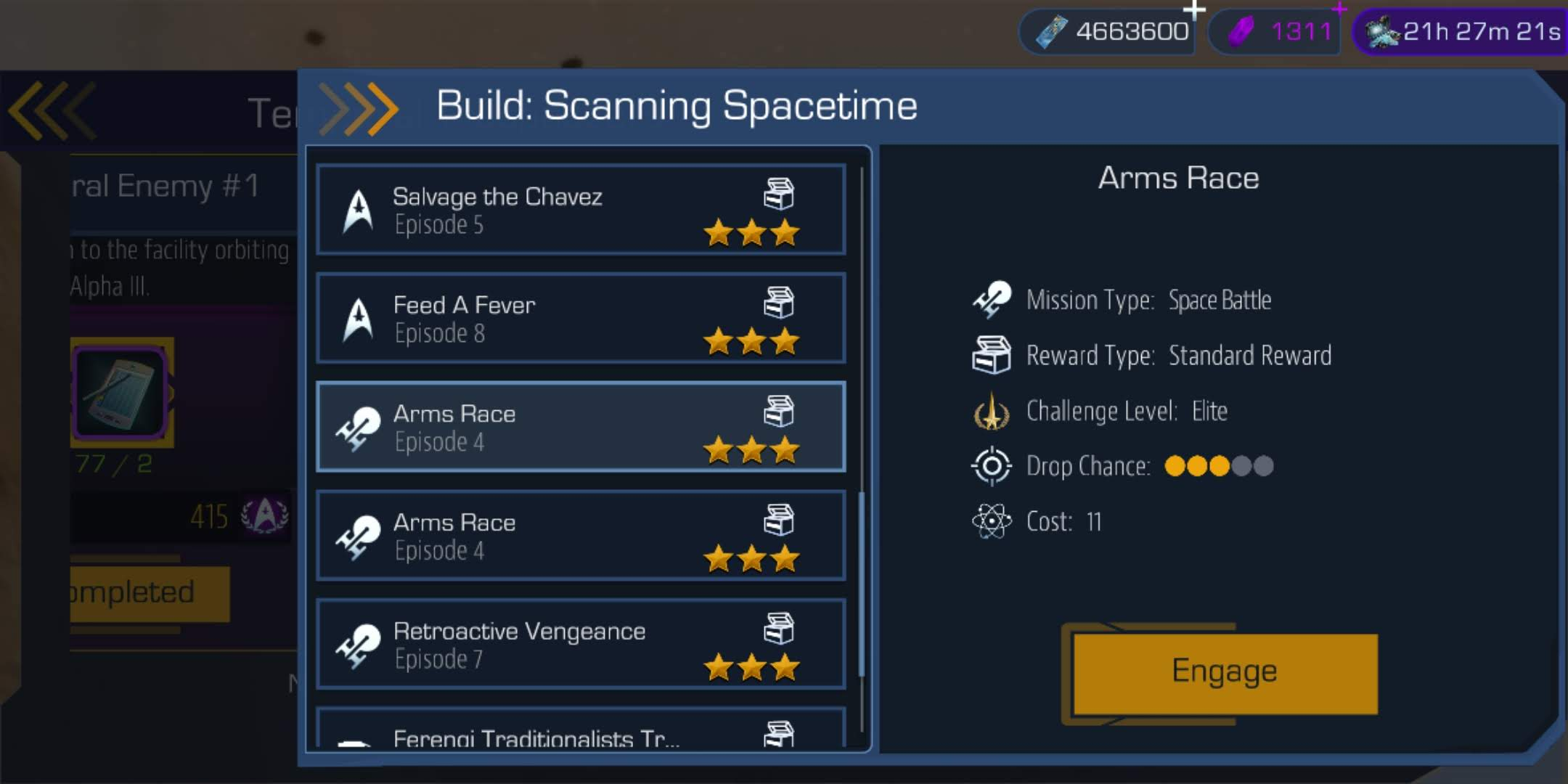 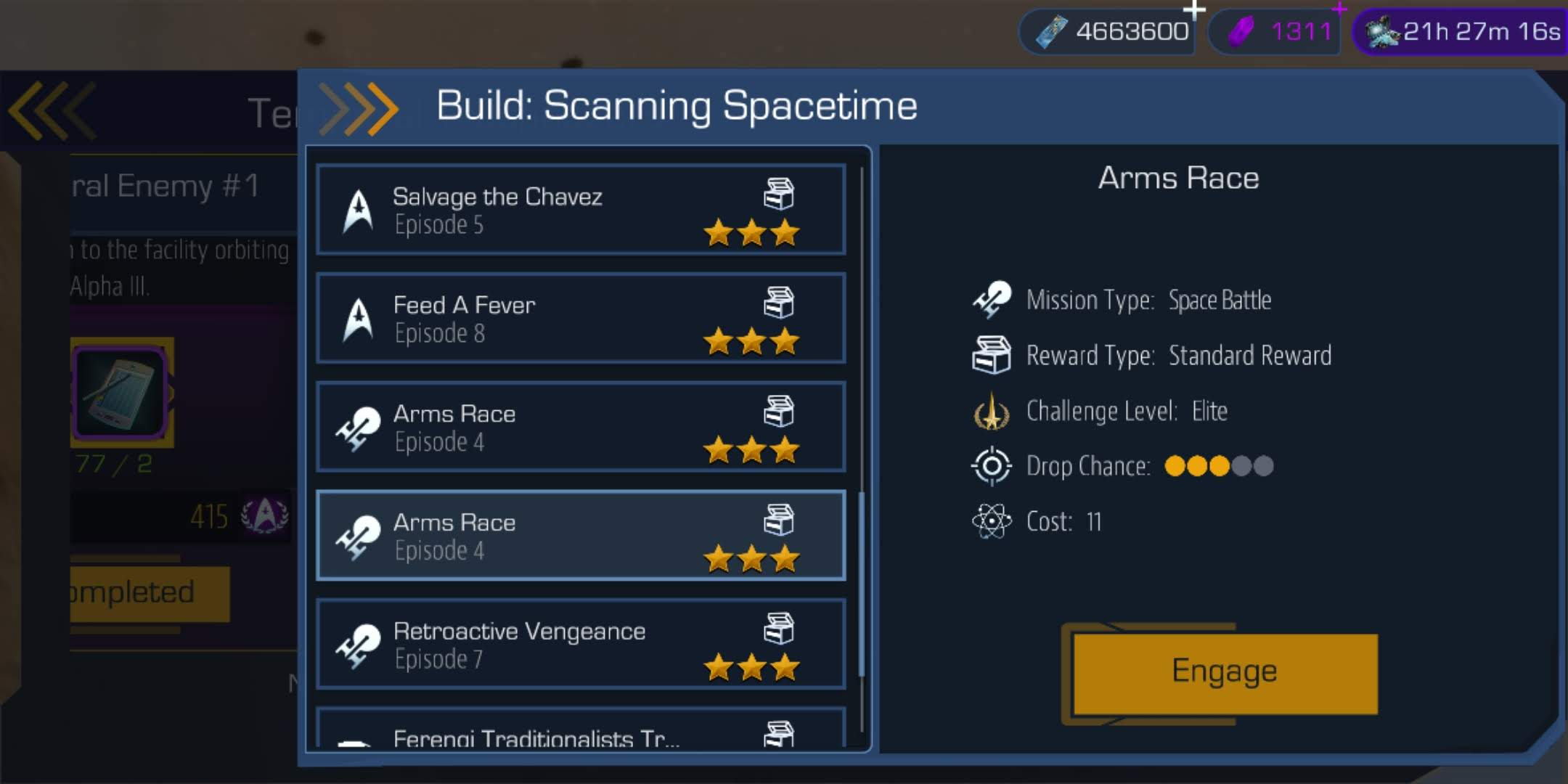 Please note my screenshots may show the lower cost using a Supply Kit, but see the repeated difficulty levels.

This is even more infuriating for some more costly crew items such as 3* rare alcohol. The best drop option is the normal Operation Isolate mission cost 12 Chron per run, 4.8 at runs per drop cost per drop should be 58 Chrons (all according to Wikki). Instead the game shows two elite difficulty operation isolate (pics below) which cost about 140 chrons per drop according to the wikki. 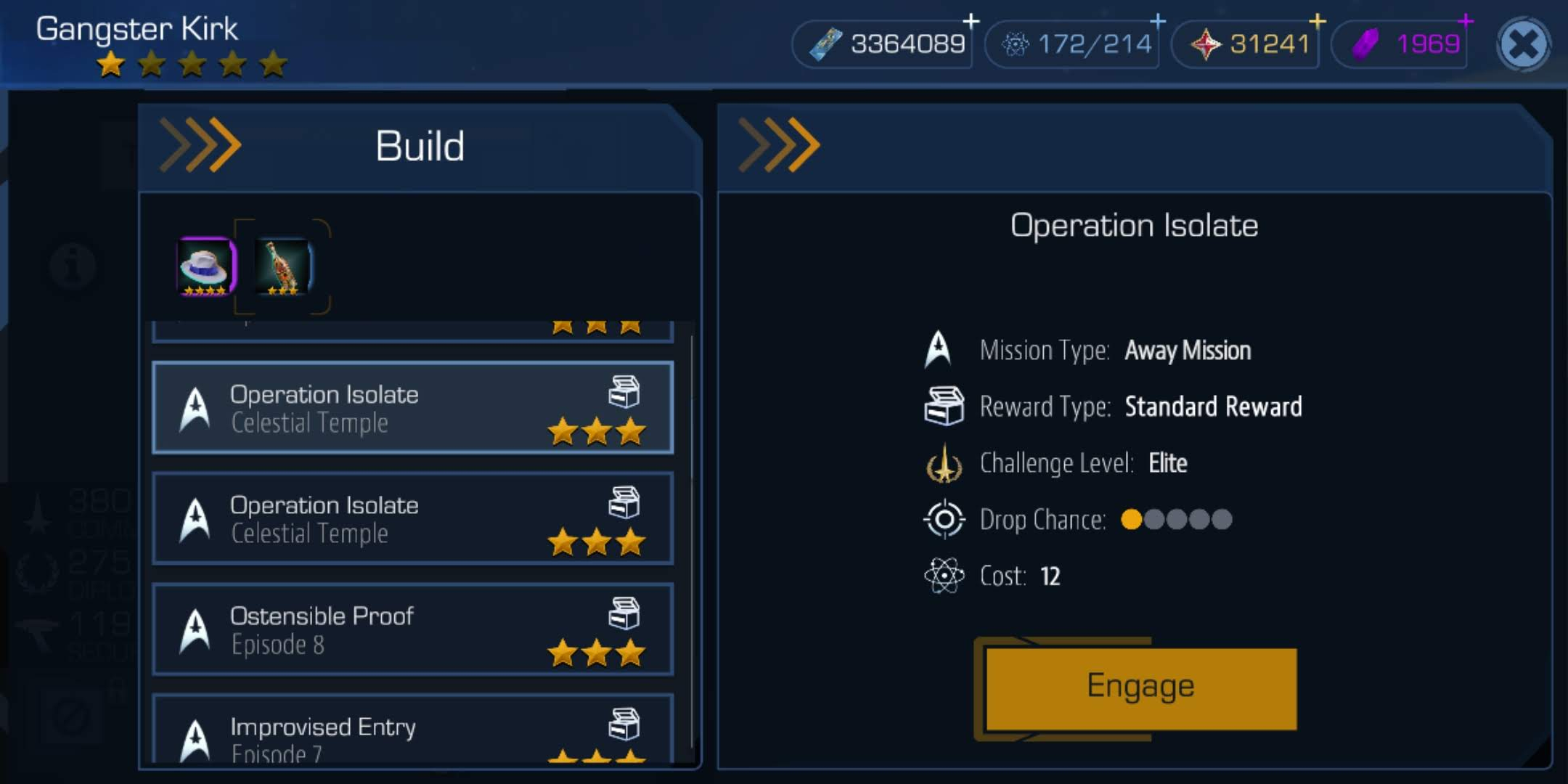 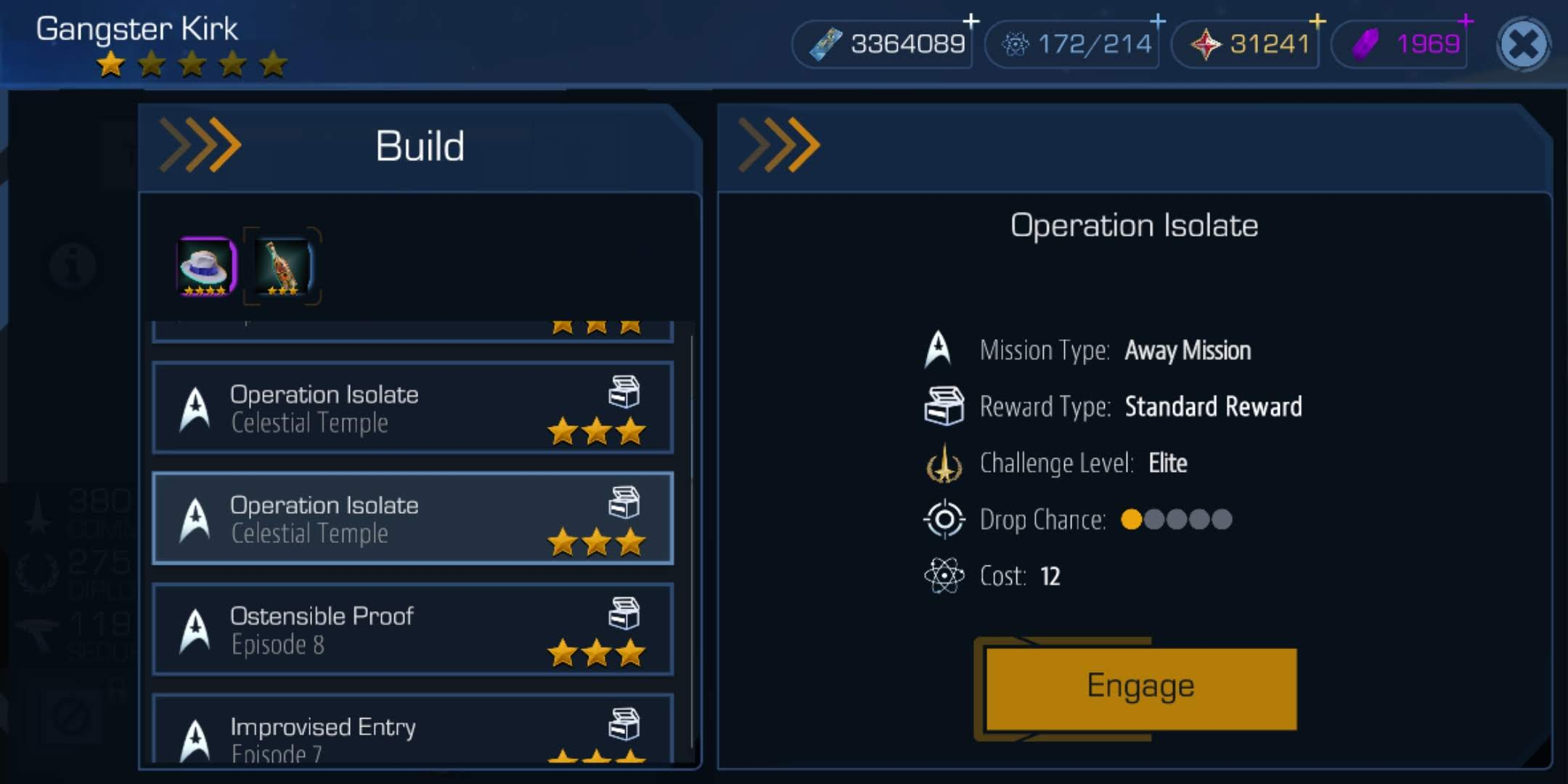 This means I am paying nearly 100 chrons more per alcohol and let me tell you my crew are heavy drinkers!

I then later found a Chronon swallower that was even more hungry trying to get a Super Rare 4* casing or polyalloy, Which is normally a one circle mission drop costing about 150 Chron per drop. Then sometimes this "Evacuation orders" mission appears at the top of your list and you think great that will drop fast. 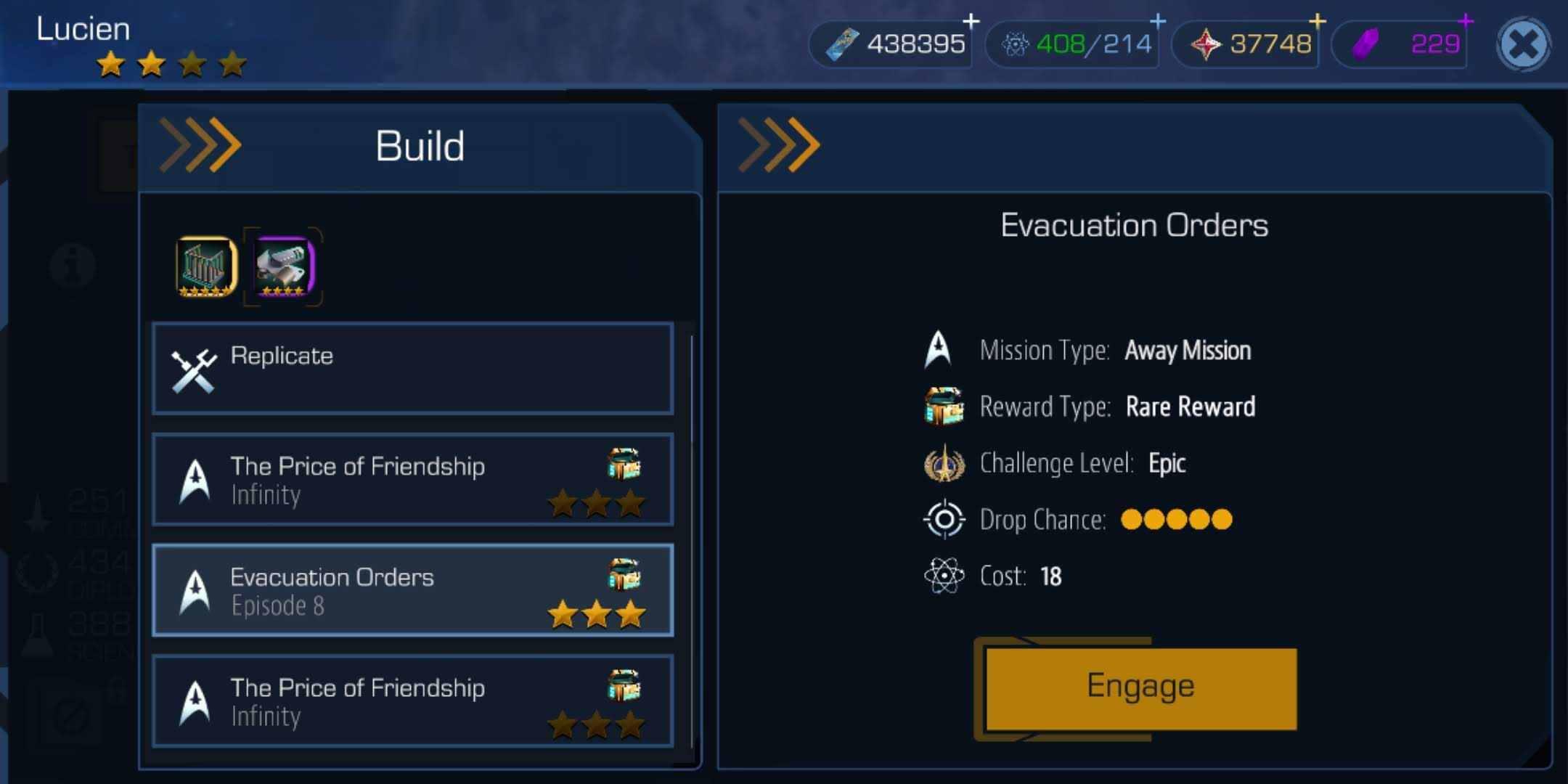 The problem is you need to read the fine print. This is only a rare drop, and I had already got the rare drop, so here I was clicking away on this and there was no way it was going to drop, late at night you can click it a dozen or more times without realising this and burn a few hundred Chron. Take screenshots and you can get help.

When you see it happening it can be fixed by restarting the game. But it comes back again quickly, either after a certain time or after you have done the missions once or twice. It has been happening for at least 2 months, but it is really hard to notice unless you remember the best missions to run for each item.

I have also tried clearing all settings and reinstalling the game. That is a bad idea because it does not fix it but after doing a reinstall you lose all your add benefits for about a week. I play only on Android so not sure about other platforms. I would be very interested in hearing from anyone else who notices this, or not. Particularly if you are living further away from game servers so the game is slower to respond, since I think it may be a sync issue which I have noticed on some other issues with screen refresh.

Thanks heaps if you have read down this far.
4