My Guide to Crew Management and Dismissal Decisions

Travis S McClain ✭✭✭✭✭
March 2018 edited June 2019 in Ready Room
I kinda forgot about it until I was reminded of it just a few minutes ago, but back on the old forum, I wrote a few "advice column" type threads. This one was my advice for making decisions about crew dismissals.

Note: I haven’t addressed here the most obvious point of consideration, stats. This seems to me self-evident, for one thing. Also, it’s more nebulous than the points that follow. There are enough elements to game play that allow players to have different priorities. If you’re concentrating on running shuttles, base stats matter most. If you’re trying to complete missions, minimum roll (base + minimum proficiency) is key. If you’re wanting to compete in the Gauntlet, base is irrelevant and only proficiency ranges matter. Ship abilities are also worth considering, especially if you’re competing in the Arena or wish to compete in Skirmish Events.

This Wiki page is often incomplete, but it’s still the most helpful go-to resource for seeing if the crew member you’re considering 86'ing is someone you need in order to unlock a node somewhere. These days, there are generally enough options that there’s a good deal of flexibility, but there are still a few (looking at you, Epic “One Future Ends”) where you may be stuck holding onto someone.

Running cadet missions is vital to making progress. However, it can be cumbersome to carry more cadets than is necessary. We can now warp 3*'d (i.e., fully completed) Cadet Challenge missions, so you'll want to focus on clearing those as early as you can, and then move these crew to the Cryostasis Vault to make room for more helpful crew members who are harder to fully fuse.

There are some essential cadets, some who have a few alternatives, and there are some who are 100% useless to you (Maquis Chakotay and Boomer Mayweather, for instance, aren’t even eligible for use in any challenge). Starbase and Collection bonuses have made made cadets more useful than they once were, so now you can reasonably use some on Epic level missions that they used to not be able to clear.

Your best best is to work with as few cadets as possible. "Riker's Angels" is a term I originally coined for the trio of Cadet Sito Jaxa, Ensign Pazlar, and Ensign Seska as they could clear at least one cadet mission on Epic throughout the weekday Challenges. You can use Festive Jadzia Dax or Science Officer T'Pol in lieu of Pazlar. Lt Naomi Wildman can sub for Seska for ENG, but there is one mission where Seska's SEC lets her clear nodes thanks to trait bonuses (Wildman has DIP instead of SEC as her secondary skill). Whichever trio of Angels you go with, you'll also need CMO Crusher, Nurse Kes, and/or Security Chief Worf or Lt Tasha Yar depending on which specific mission you're trying to clear.

You'll need 3* crew to complete regular missions that your 2*'s can't before you get enough 4*'s and/or 5*'s to do that, so make use of whoever you can for that. But for the purpose of streamlining your roster, remember that a lot of 3* crew are ineligible for use in either of the weekend challenges, so prioritize crew who are either Female (for use on Saturday) or Non-Human (Sunday). Ideally, you'll want to keep and use Female, Non-Human 3*'s like B'Etor Duras, Gilora Rejal, and Tourist Jadzia Dax. Remember, your free Daily Reward 3*'s each month and a top 7500 finish in an event are great ways to get Fully Fused 3*'s!

Firstly, has this crew member already been featured in an event that has not yet been replayed? (Check the Wiki page here.) Since events have been replayed (mostly) in their original chronological order, it’s reasonably easy to guess along with how long you might have to wait for another crack at some stars on them or until they’ll be useful again.

Secondly, there’s guessing along with future events. How likely does it seem that this crew member (or at least some persona of that character) will turn up in an event? It’s likelier that a Kirk persona will be helpful in a future event than it is that, say, Automated Unit 3947.

The only way to collect as many crew as possible is to move completed ones to the vault to make room for newcomers. If you’re looking to do that, it’s important to consider how likely it is that you’ll be able to fully fuse the crew member. Honor Citations make it a little more practical than it used to be, but they’re costly enough that it can still take awhile. Recently introduced Campaigns give a great opportunity to collect a Fully Fused 4* crew member and a 4* Citation at the end that you can put toward someone else, so keep up with your Daily Missions!

Also, Collections may influence your decision here. For instance, I'd never kept Telek R'Mor no matter how many copies of him I got at a time. He just wasn't necessary for my cadet roster since he was only useful in Tuesday's "The United Federation". However, a few days ago, I made a point to finally keep him because he's one of the few Romulans presently in the game (and one of the even fewer who aren't 5*'s!).

Is this a crew member you earned from participating in an event? Sometimes it feels nice to scroll through the vault and see that crew member. I used to try to keep every event-earned crew member, but of course that became impractical. I do still make an effort to accommodate anyone I earn from an Expedition Event, though.

Aside from the required traits, this is really the most important factor to consider. Since you’re considering dismissing someone, it’s clear you’re not presently trying to collect everyone. Or, at least, you realize you’re going to have to hold off and wait for someone to come back around when you’re more able to dedicate the resources to them.

Every single crew member, 1* or 5* or anywhere between, requires the same 293,910 XP to fully level. I’ve found I’d rather sink that XP and all the items and chronitons into characters/personae that I like. It makes completing them feel more satisfying, whereas slogging through to finish someone I’m not into felt like a tedious chore. Who wants their gaming experience to be a tedious chore?

Anyway, I hope this helps!

In the original version, I dashed off a crude hand drawn flowchart. @Data1001 kindly created this legible version: 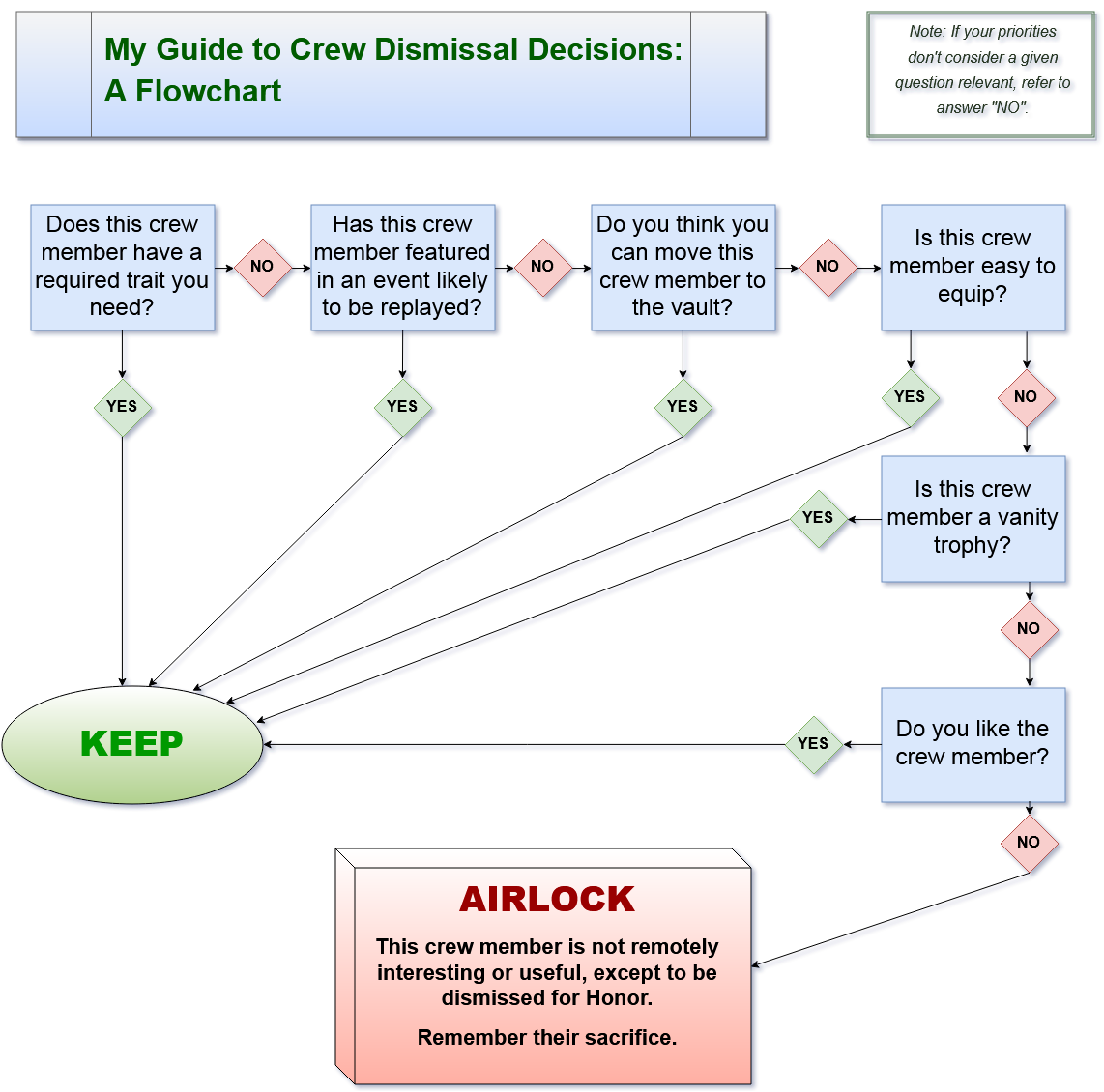