[Resolved]What is up with Tribble Sato's flavour text? 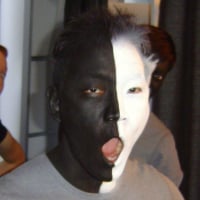 Someone having a bad autocorrect day?
0