"Beowulf EMH" had a name - Schweitzer

Sky Cap ✭✭✭
November 2021 edited November 2021 in The Bridge
Really disappointed to see Lord Schweitzer go live today with the nonsensical name "Beowulf EMH." The Doctor took a name in that episode and it's a meaningful part of his character development, it should be the name of the card.

For those who haven't seen Heroes and Demons recently, and this apparently includes WRG's creative team: there is a malfunction in the holodeck and the Doctor goes on his first away mission to save the day. The program in question is Beowulf, with Harry Kim playing the title character. (This is why it makes sense for Beowulf Kim to have that name--he is in character as Beowulf!)

The Doctor is nervous and in a lovely moment between him and Kes, Kes suggests he choose a name, telling him, "It might help you feel more like a Starfleet officer." When the Doctor enters the program he soon meets Freya, and he introduces himself as Doctor Schweitzer. Throughout the episode, Freya and her fellow Danes call the EMH "Lord Schweitzer."

Schweitzer falls for Freya and they have a short romance together before Freya is tragically killed. Her last words are, "I die happily with your name on my lips. Farewell, Schweitzer." Back in sick bay at the end of the episode, the Doctor abandons the name, telling Janeway, "I'm not sure I want to keep it. The last time I heard that name spoken was a painful one. I don't think I want to be reminded."

This episode is a milestone for the Doctor and his adoption of a name underscores both the significance of the adventure he is about to go on and the loss he suffers at the end. For the card to be named "Beowulf EMH" instead of his actual name is lazy, careless, and terribly dismissive of the Doctor's character growth in the episode. Please rename the card Schweitzer (or Doctor Schweitzer or Lord Schweitzer) as befits the character and the episode. 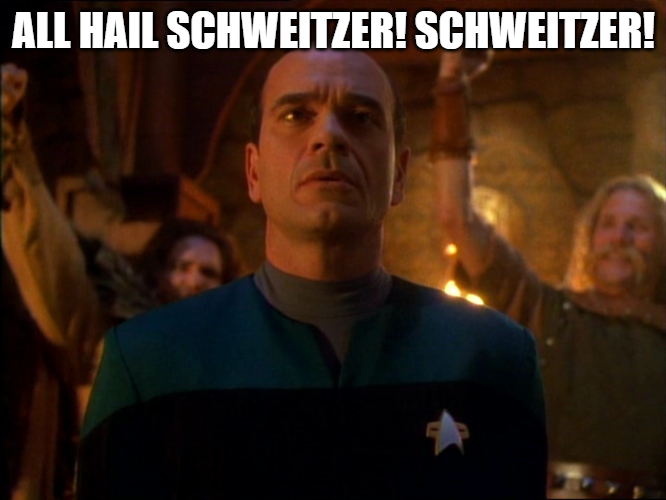